David is joined by Barry Dyke author of The Pirates of Manhattan. 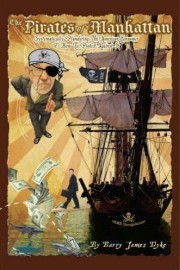 From the back of the book: Get behind the scenes of modern finance and discover the people and financial institutions which control your financial life. Learn why finance is rigged in favor of insiders in banking, Wall Street and mutual fund companies.

David and Barry discuss the following topics and more:

The Federal Reserve and it’s impact on the average American.

The repeal of The Glass-Stegall Act and the passage of The Gramm-Leach-Biley Act of 1999.

Why big banks want all regulations to be consolidated at the federal level.

Wall street and it’s appetite for speculation (The Casino Age)

How big banks circumvent state usury laws that allow them to charge twenty plus percent on credit cards loans. These provide billions in profits to the big banks.

Kickbacks, bribery, embezzlement, collusive bidding practices and other dishonest practices take place in International banking which has NO regulations. (The IMF and The World Bank)

How international banks which are often owned by Big U.S. Banks, call on the Federal Reserve, The International Monetary Fund, The World Bank and the United States Treasury to bail them out. Once again, the American tax-payer gets hosed!

The breathtaking amount of violations, fraud, and deceit that have taken place in the mutual fund industry. (Pages 108-115)

Hedge funds and the passage of the Dodd-Frank.

FINRA, the Self-Regulatory entity that oversees the securities industry. Is this the Fox guarding the hen house?

Bank Owned Life insurance (BOLI’s) The vast majority of the population are unaware that big banks own billions of dollars in high cash value permanent life insurance, yet many of them advise the exact opposite. Many banks have up to 25% of their tier one capital assets in Bank owed life insurance.

Some interesting facts about the life insurance industry:

~The life insurance industry has trillions on dollars invested in the U.S. Economy. In fact, insurance companies are the largest source of bond financing in the United States.

~ During the great depression, policy holder deposits held with life insurance companies were found to be more than 99.9% safe.  This can’t be said of the banks in the U.S during the same time period.
~After the market crash in 1929 it was Insurance Companies that provided liquidity to the banks.
~The life insurance industry has not strained the federal government for tax payer subsidized deposit insurance or numerous bailouts.

Unfortunately, the majority of life insurance contracts are not properly structured. Very specific guidelines have to be followed and adhered to.   However, with the assistance from a skilled professional you can achieve the following:

1. Tax-Free Accumulation on your money.
2. Tax-Free Distribution
3. Earn guaranteed  compounding interest with no market risk.
4.  Liquidity use and control of your money, while your money continues to compound uninterrupted.
5. Tax-Free death benefit no matter when you die.
6. The ability to finance every major purchase with your policy.

To learn more, contact our sponsor David Lukas Financial at 501-218-8880 or online at: DavidLukasFinancial.com