The David Lukas Show is the evolution of a radio show that has been in existence for over nine years. This website contains an archive of all of these shows. The show was recently named in the Top 100 Financial Shows in the United States according to Nielsen Ratings.

The show has featured interviews with experts who have regularly appeared on other major media outlets such as Fox News and CNN. If what you thought to true about your money turned out not to be, when would you want to know?

The David Lukas Show airs locally Saturdays at 10am and 3pm on 96.5 The Answer, 12pm on Faith Talk 99.5 and as always News Radio 102.9 at 2pm on KARN News Radio 102.9FM (Central Arkansas). The show is also accessible through our Podcast which has thousands of downloads per month.

The Official David Lukas Show Android App,  Iphone App  and Windows App are available and FREE!!!  You can listen to the archived shows on demand, take advantage of valuable information and bonus content. 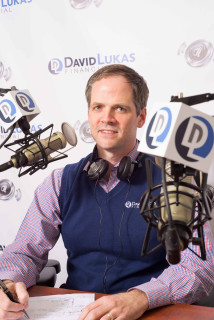 David Lukas has been an entrepreneur since 1993.  Ever since, David has been passionate about creating businesses that serve the needs of consumers and businesses.  One of David’s earliest business ventures, an internet filtering service, was the first of its kind in central Arkansas and was recognized by New York Times best-selling author Robert Kiyosaki in his book “Rich Dad, Success Stories”.

David Lukas has over 20 years of business experience spanning the Technology, Investment Banking, Mortgage Banking, Insurance, Financial Services and Real estate industries. More than a decade of that time was spent in the financial services industry

David is a published author of “Whose Future Are You Financing?” This book was a result of his comprehensive study,     research and application of economics, Banking and our monetary system.