Many things are associated with the number twelve. There are twelve months in a year, you can buy cookies, doughnuts and eggs by the dozen, and of course, there’s the twelve days of Christmas. There’s also that elusive 12% average rate of return that Dave Ramsey, the popular financial talk show host leads his faithful followers to believe they will easily achieve by investing in mutual funds. 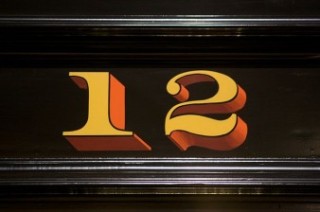 It’s important to separate fact from fiction.  Dave Ramsey has benefited thousands of people who are in a constant cycle of debt. He is to be commended for helping people in this regard. However, when he shifts to the subject of accumulating wealth, much of his advice is misleading at best.

We encourage you to do your own research. Just because someone teaches Dave’s course in your church or you read one of his books doesn’t make it the truth.

David outlined in the Financial Peace? Podcast some of the statements that he has written can be disproved with math. Again, don’t take out word for it, do your own research.

In the real world, there are real issues that affect the 12% assumptions. 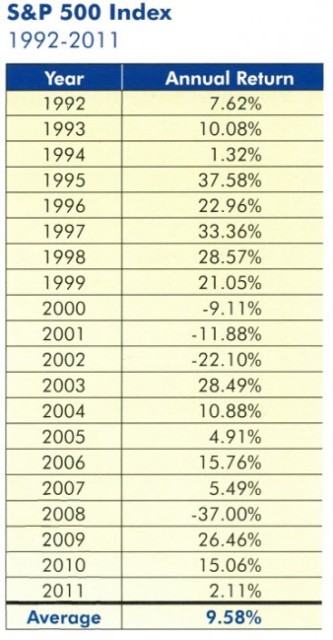 Take the following snapshot of the S&P 500 Index.  While it I impossible to predict the future course of any investment, we can test this hypothesis through the use of historical data. We do know what the equity indexes produced in the way of historical returns. See the S&P 500 index on this page (1992-2011) we can look at that performance using some basic assumptions to determine how an individual might have seen their assets accumulate over that time period. As you can see, the index averaged 9.58%.

With that in mind, since we live in the real world, we have to take into consideration the following:

2.Single Payment VS. Multiple payments:  In the real world, most individuals invest over time. One potentially misleading aspect of advertised returns is that they are predicated on a single investment made at the beginning of a given time period. But as we know, that’s not how most people accumulate wealth. In reality most people invest over time, not in one lump sum. If we assumed 20 equal annual payments on January of each year, the real rate of return for our dollars drops from 7.8% to 5.92%.

3. Managed Portfolio Cost: Most of the advertised projections fail to take into consideration management cost. Once again, in the real world that isn’t usually the case. At some point, somebody needs to get paid to manage money. Either a mutual fund manager, fee based adviser, stock broker or some other entity will most likely be compensated. If we assume a 1% annual management fee, the rate of return now falls to 4.82%

4. Management fee alternatives: There are alternatives that could be pursed by those wanting to avoid management fees. A popular one today is an exchagne traded fund (ETF), which invest in  an index and requires no management. Had the annual payments been made to an ETF which invested in the S&P 500 index, no management fees would have been paid. But the real return would have been only 3.77%  instead of 9.58% Why? Because ETFs reflect price changes only, there are no dividends, and dividends have historically generated somewhere between 1.5% and 4.00% of the S&P 500’s rate of return when reinvested back into the index.

5. Taxes! In the real world, we have to consider taxation. Ultimately, taxation reduces the amount of assets that can be used. If we assume taxes are only due at the end of the period and we use a long-term capital gain rate of 15% the return would be 4.27%  That is less than half of the advertised rate of return for the past 20-years.