Think the creation of money is a boring subject? Think again! Just how much do you know about that Federal Reserve Note that’s in your wallet?

The American Heritage Dictionary defines fiat money as “paper money decreed legal tender, not backed by gold or silver.” The two characteristics of fiat money therefore, are, it does not represent anything of intrinsic value and (2) it is decreed legal tender. Legal tender simply means that there is a law requiring everyone to accept the currency in commerce.

“We are living in an age of fiat money, and it is sobering to realize that every previous civilization in history that has adopted such money have always economically been destroyed by it.” 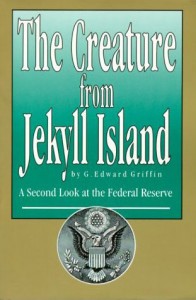 From the back of the book: Where does money come from? Where does it go? Who makes it? The money magicians secrets are unveiled. Here is a close look at their mirrors and smoke machines, the pulleys, cogs, and wheels that create the grand illusion called money.

TUNE IN TO HEAR DAVID AND MR. GRIFFIN DISCUSS:
The secret meeting on Jekyll Island in Georgia at which the Federal Reserve was conceived. This meeting consisted of 6 men who represented 25% of the worlds ENTIRE wealth and the time.  This meeting was the birth of the banking cartel better known as The Federal Reserve. The strategy was to protect its members from competition; the strategy of how to convince Congress and the public that this cartel was an agency of the United States Government.

The basic plan for the Fed system was drafted at a secret meeting held in Nov. of 1910 at the private resort of J.P. Morgan on Jekyll Island Off the coast of Georgia. Those who attended represented the great financial institutions of Wall Street and indirectly, Europe as well. The reason for secrecy was simple, had it been known the rival factions of the banking community had joined together, the public would have been alerted to the possibility that the bankers were plotting an agreement to eliminate their competitors, which of course is exactly what they were doing.

The stated objective of The Federal Reserve System is to stabilize the economy, yet since its inception, it has presided over the crashes of 1921 and 1929; the great depression of 29’ to 39’ recession in 53’ 57’ 69’ 75’ and 1981, the stock market “Black Monday” in 87’ and 1000% inflation which has destroyed 90% of the value of our dollar.  Inflation is the largest hidden tax known to man. What the public would never tolerate through direct taxation, they have unknowingly  been subjected to an enourmous hidden tax. The tax of inflation. In terms of The Federal Reserve acheiving their true objectives, they have been an unqualified success.

“The few who understand the system will either be so interested in its profits or be so dependent upon its favors that there will be no opposition from that class, while on the other hand, the great body of people, mentally incapable of comprehending the tremendous advantage that capital derives from the system, will bear its burdens without complaint” The Rothschild brothers of London writing to associates in New York, 1863. 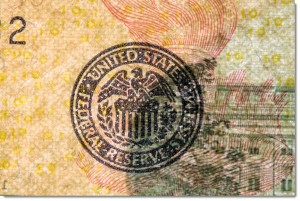 A consequence of the national banking system was to make it impossible from that date forward for the federal government ever to get out of debt. It is a little known fact that all of the currency circulating within our economy was created out of debt. Our current monetary system utilizes mostly government bonds as backing for the money supply, it has locked the nation into perpetual debt.

Even advocates of central banking have admitted this reality. Economist John Galbraith stated “ following the civil war, the Federal Government ran a heavy surplus.  However, it could not pay off it’s debt, retire its securities, because to do so would mean there would be no bonds to back the national bank notes. To pay off the debt was to destroy the money supply.”

David and Mr. Griffin briefly talk about the IMF and The World Bank.

Congress passed the Monetary Control Act of 1980 which authorized the Federal Reserve to “monetize foreign debt”.  That is banker language meaning that the fed was now authorized to create money out of nothing for the purpose of lending to foreign governments. Until that moment, it was only allowed to make money for the American Government. Since then, The Federal Reserve has been functioning as a central bank for the entire world!

Think the creation of money is a boring subject? Think again! Just how much do you know about that Federal Reserve Note that’s in your wallet? Tune in to listen to David interview G. Edward Griffin, author of The Creature From Jekyll Island.

To make smart decisions with your money, It’s  imperative that you understand what is really going on. If you would like to talk to David about this topic or any other topic, call him anytime at: 501-952-3090.

To learn more about G. Edward Griffin and to order his book, visit: